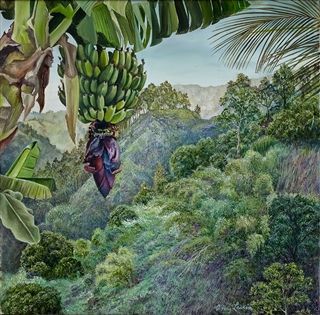 During May and June 2019, the Goldberg Gallery at Fryeburg Academy in Fryeburg, Maine is pleased to announce that it will host a collection of oil paintings, featuring the work of artist Amy C. Laskin. Laskin describes her work as a combination of fantasy and reality—often combining the unusual.  "My paintings often focus on an anonymous nonrepresentational figure comprised of natural elements and unusual combinations,” says Laskin. “I am interested in decorative language and the assemblage of forms which are placed in situations existing in a natural worldly environment. Ostensibly, these combinations are of a surrealistic and mythical nature presented in a cogent way to suggest something phantasmagorical."
Laskin’s interest in art began at an early age and was encouraged by her parents to attend the Philadelphia Museum of Art. She later went on to receive her BFA from the Pennsylvania State University in 1977 and her MFA at the School of the Art Institute of Chicago. While there, the influence of what she refers to as the “Chicago Imagists” helped her develop a new approach to her work in making “beautiful, exotic and unusual images”.
In 1986, Laskin spent three years in Jamaica as part of the Peace Corps. It was the islands lush and tropical vegetation that gave Laskin the inspiration and natural forms she uses in her artwork today.
To learn more about the artist, please visit her website at https://amyclaskin.com/amy-laskin/
Back