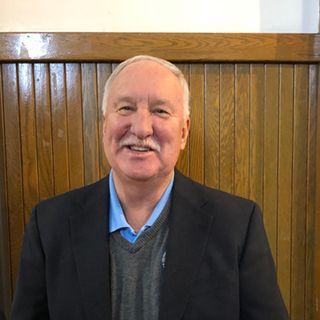 Recipient of the 2018 Distinguished Alumni Award, Gerald Durgin, Class of 1968, was a three-sport athlete at FA, who later went on to an outstanding career at the University of Maine at Farmington. He has held positions as a teacher and coach at Telstar High School in Bethel, also serving as dean, administrator, and dorm parent at Fryeburg Academy.
He became an assistant executive director of the Maine Principals’ Association, after moving to Gorham High School and serving as that school’s athletic administrator. Throughout his career, Gerry has been involved with the MIAAA, serving on their board of directors for 15 years, and was the chairman of the MIAAA State Conference for 10 years. At the national level, his involvement with the NIAAA has included being a member of the NIAAA Publications Committee, serving a four-year term on the Board of Directors, as well as serving as the organization’s president in 2007. He chaired the NIAAA Third Strategic Plan, and served as the chairman of the first NIAAA Accreditation Committee.
He currently serves as the state tournament director in golf, football and basketball. He has been an adjunct professor at the University of Southern Maine and Saint Joseph’s College.
He has been inducted into the Fryeburg Academy Hall of Fame (in their inaugural class), the Gorham High School Hall of Fame, into the NIAAA Hall of Fame in 2012, and in 2017 into the MPA Hall of Excellence.

Gerry and his wife, Ellen, reside in Gorham and have two grown daughters, Alicia and Jennifer, and seven grandchildren, Jackson, Joey, Jamie, Elizabeth, Brecken, Kinsley and Kagan.
Back