Our Arts program was created to bring an appreciation of the fine arts into students' lives by discovering individual talents, encouraging original expression, and fostering creative discovery. On campus, Students experience live professional performances in the Leura Hill Eastman Performing Arts Center, see professionally curated exhibits in the PACE Galleries, and display their own works of art in the Nadler Gallery.
Arts The Pace Galleries of Art presents Ian Factor "Resolve & Resilience". This show features a collection of emotionally arresting works in oils on canvas and charcoal on paper created over the last decade from Ian's time living in New York City and Bend, Oregon. It includes pieces from a series conveying a social and/or political narrative, plus numerous portraits, and selections from his highly-charged Danger series.  All works available for purchase.

The Academy is eternally grateful to the Paces.

Officially opened in January of 2009, the Pace Galleries are within the new Leura Hill Eastman Performing Arts Center and were made possible by a gift from the Paces. Stephen Pace is a world-renowned artist. He and his wife, Palmina, lived in Indiana on the campus of the University of Southern Indiana, which also benefits from a Palmina F. & Stephen S. Pace Galleries.

Stephen Pace was born in Missouri in 1918. He studied art in Indiana, Mexico, New York City, Paris and Florence. He served in World War II. He was a professor at American University in Washington, DC and retired in 1983. Palmina Pace was born in Massachusetts. She worked in advertising in New York City and married Stephen Pace in 1949. She has managed her husband's career since that time and has been instrumental in his ability to devote himself to his art.

The Academy is eternally grateful to the Paces.

Until his recent death, Stephen resided in New Harmony, IN, with his wife, Palmina, who continues to live there. 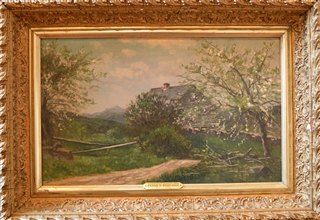 Please stop in and visit us!